“I am excited to serve the citizens of the dynamic and fast-growing city of Edinburg” said Raudel Garza. “The Rio Grande Valley is my home; it is where I have chosen to raise my family and seeing it grow and thrive is of utmost importance to me. I look forward to working with the EEDC Directors, the City of Edinburg, the Edinburg Chamber, and many other stakeholders to move the needle forward on bringing increased development, job creation and enhanced opportunities to Edinburg” said Garza.

As Executive Director, Garza is tasked with working with the EEDC Board of Directors to implement the EEDC goals and coordinate, develop and manage the EEDC incentives and programs that will attract businesses that will increase the local property tax base, create jobs, and contribute positively to the well-being of the Edinburg community and its citizens.

“We welcome Raudel Garza to Edinburg. It is no secret that Edinburg is growing fast, has many assets and has much potential. Our board is confident that Raudel’s decades of economic development experience in both the private and public realm, coupled with his wide network of contacts and his ability to work regionally will be of great benefit to Edinburg and that with his leadership, we will see a continued development of Edinburg’s economy and quality of life” said Veronica Gonzales, president of the EEDC Board.

“We’re very fortunate to have someone who knows our area and has over three decades of experience, connections across the border in Mexico, a history of working with an airport, and a reputation of bringing new businesses to an area that did not previously exist. I feel really excited to have someone with such an extensive background and lay of the land, join and help us lead Edinburg to where we want to be,” added Edinburg EDC Board Member and Edinburg City Councilmember for Place 1 Daniel ‘Dan’ Diaz.

The Edinburg EDC Board also extended its gratitude to Nelda Ramirez, the interim Executive Director for the EEDC, for her tireless work over the last several months as it searched for a permanent Executive Director. 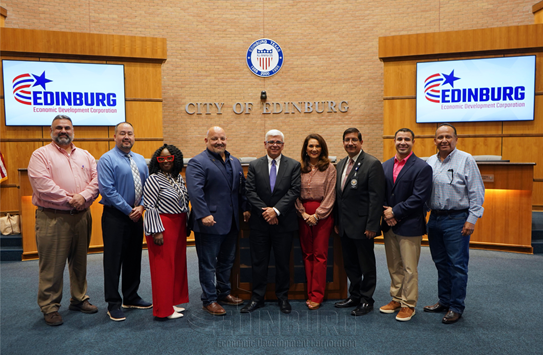